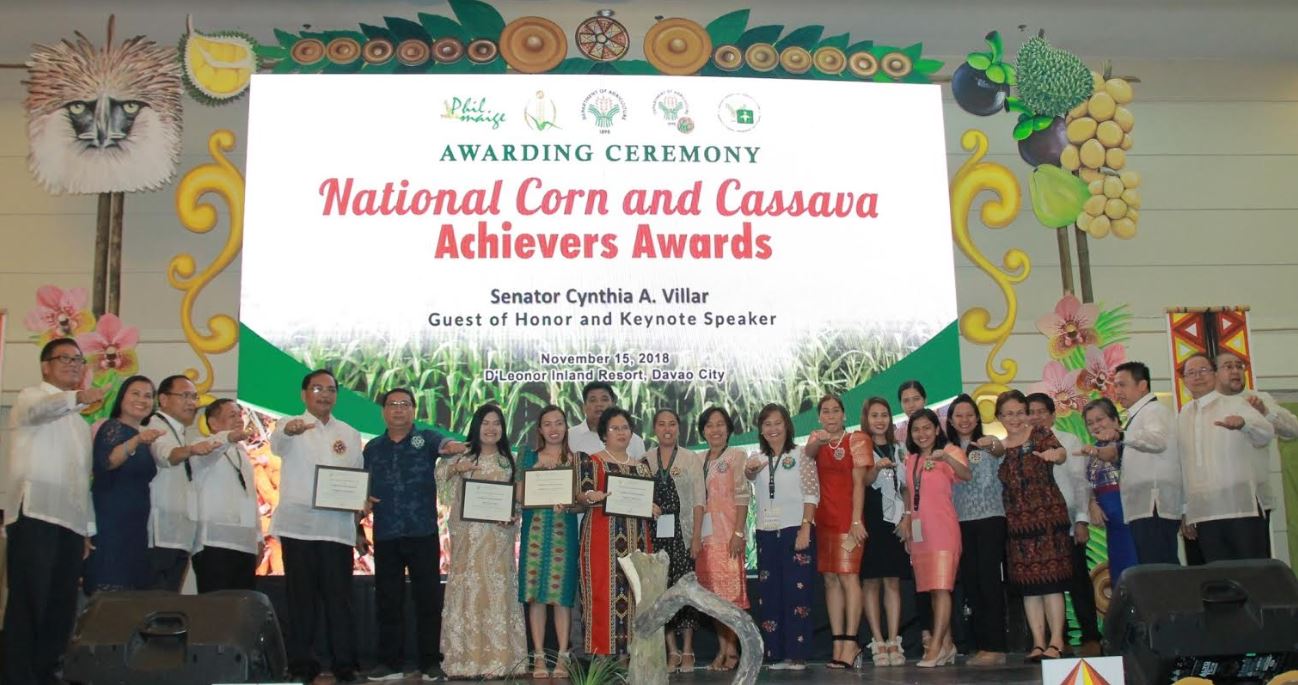 Also declared as outstanding municipalities this year are the municipalities of Molave and Dinas in Zamboanga del Sur. The Department of Agriculture (DA) Region IX - Zamboanga Peninsula is also recognized as Outstanding Corn and Cassava Program Team for being able to produce national winners.

In her message as keynote speaker, Sen. Cynthia A. Villar, Chairperson of the Senate Committee on Agriculture and Food lauded the performances of all the sectors working together in achieving the corn industry’s status today. “As second most important food crop of the country, corn is also one of the top sources of income and livelihood of a significant number of our fellow Filipinos. Thus, it is good that corn industry stakeholders can congregate in this yearly event to discuss important issues affecting the sector, share best practices, showcase modern farm equipment/technologies and forge market linkages,” Senator Villar added.

The efforts and hard-work of the Agricultural Extension Workers (AEW) were also given merit. Among the 100 Outstanding AEWs, 14 represents ZamPen. From the province of Zamboanga del Sur were Belen E. Alvarez from Dumingag, Loreta A. Sumagang from Mahayag, Promise C. Calonia from San Pablo, Arlene T. Isola and Edgar B. Muerong both from Molave; Editha M. Quicoy from Labangan, Victoria D. Selim and Ailyn D. Daños both from Bayog; Irene D. Cabo from Tigbao and Lilia P. Grijalvo, Marvin L. Talas and Sarah A. Subiran from San Miguel. There were also from Zamboanga del Norte, namely Rosabella B. Calupez from Tampilisan and Elizabeth G. Insong from Liloy. Winners received a plaque of recognition and cash prize.

Philippine Maize Federation, Inc. President, Engr. Roger V. Navarro said that this year’s congress’ theme “Linking Corn Farmers; Towards Inclusive economic Growth & Competitiveness” is their campaign to adopt, innovate and create the inclusive development they wish for the corn farmers, stakeholders in the industry and for every Filipino. “If we Filipino people, unite together and help one another by linking farmers who nurture the food that we ate, surely we will see farmers upgraded, uplifted and respected.”